Goods subject to excise duties can be delivered in various ways. The explanation below is based on the trade in common excisable goods. 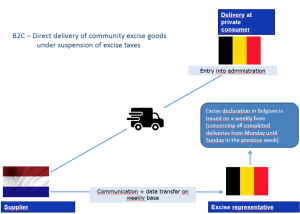 A Belgian brewery produces 100 litres of beer and immediately pays excise duty to the Belgian government after production. The brewer then sells the 100 litres of beer to a café in Belgium. No further action needs to be taken in Belgium for excise purposes, as this is not a cross-border sale.

A Dutch winegrower produces 100 litres of wine and immediately pays excise duty to the Dutch government after production. The winegrower then sells the 100 litres of wine to a Belgian restaurant. The delivery of the wine must be carried out under cover of a Single Administrative Document (see procedure above). For excise purposes, action must be taken in Belgium where the wine will be consumed. After payment of the excise duty in Belgium, the Dutch winegrower can then submit a request for reimbursement in the Netherlands for the ‘double’ payment of the excise duty. 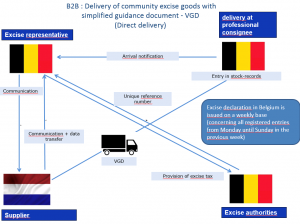 Flow of products on which excise duty has not been paid: B2B

B2B means that the excise duties on the goods have not been paid by the supplier in the Member State of departure. The delivery of these goods must be carried out under cover of an eAD. The buyer or an external partner in the Member State of destination must be in possession of the necessary excise authorization(s) to receive the shipment and process it for excise duty purposes. 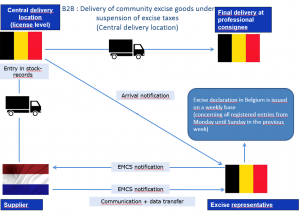 Importing from a third country

When importing excisable products from a third country, account must be taken of three forms of indebtedness: customs duties, VAT, and excise duty. The way in which the debts are represented and/or paid depends on various factors such as the place of entry into the European Union, the final destination of the excisable products, and any authorizations issued by the importer (or an external partner of the importer) at the final destination.

A Belgian business buys wine in Argentina and the goods are imported via Belgium.

Option 2: Upon arrival in the European Union at the port of Antwerp or Zeebrugge, the goods can be stored in a bonded warehouse as soon as the import declaration has been completed. The customs duties are paid via the import declaration, but the excise debts are temporarily ‘suspended’ by drawing up an eAD to the bonded warehouse.  *To draw up an eAD after import, the customs agent must have the necessary registered consignor authorization.

B. A Belgian business buys wine in Argentina and the goods are imported via the Netherlands.

Option 1: Upon arrival in the European Union at the port of Rotterdam, an import declaration can be drawn up in the Netherlands in which any customs debts are paid. For excise purposes, an eAD must be drawn up for Belgium in order to pay the excise debts in the Member State of destination. *To receive an eAD after import, the importer or their external partner must have the necessary registered consignor or bonded warehouse authorization.

Option 2: After arrival in the European Union at the port of Rotterdam, a transit declaration can be made in the Netherlands for transit of the excisable products to Belgium. An import declaration can then be drawn up in Belgium after the goods have arrived for payment of customs duties and excise debts. 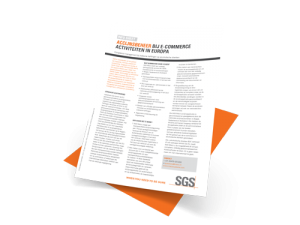